Would you like to switch to the accessible version of this site?

Don't need the accessible version of this site?

A form of behavioral therapy can augment antidepressant treatment of obsessive compulsive disorder (OCD) better than an antipsychotic, researchers have found. They recommend that this specific form of cognitive behavior therapy (CBT) – exposure and ritual prevention – be offered first to OCD patients who don’t respond adequately to treatment with an antidepressant alone, which is often the case. Current guidelines favor augmentation with antipsychotics.

In an accompanying editorial, grantees Kerry Ressler, M.D., Ph.D. and Barbara Rothbaum, Ph.D. , of Emory University, Atlanta, note that antidepressants are effective in treating only a subset of OCD patients. Similarly, antipsychotics appear to benefit only a subset of patients, such as those with tic-disorder related OCD.

While such medications transiently relieve symptoms of circuits gone awry, CBT is thought to act though different mechanisms that actually change the underlying workings of connections in those circuits, say the authors. For example, exposure to fear-provoking situations without experiencing the feared consequences appears to teach the brain’s habit-forming circuitry to unlearn dysfunctional behaviors, such as compulsive rituals. The only medication shown to enhance such emotional learning is D-cycloserine, which, unlike most other drug treatments, is given only just prior to therapy sessions.

Matthew Rudorfer, M.D., chief of the NIMH Somatic Treatments Program, which funded the study, said that in demonstrating how different patients respond best to different approaches, it helps to move the field toward the goal of more personalized treatment. In helping to explain how different treatment types work via different circuitry, the findings and analysis also dovetails with the objectives of the NIMH Research Domain Criteria (RDoC) project, according to Bruce Cuthbert, Ph.D., director of the NIMH Division of Adult Translational Research and Treatment Development. 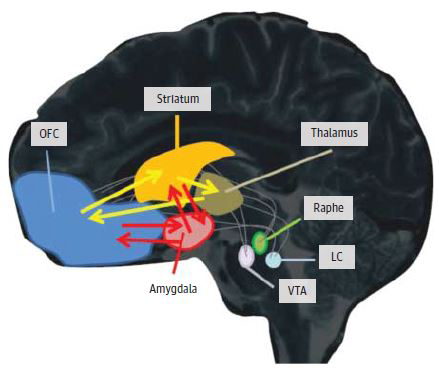 A form of behavior therapy – exposure and ritual prevention – is thought to enhance emotional learning by altering connections in a brain circuit (yellow arrows) involving the orbital frontal cortex (OFC), striatum and thalamus. This circuit’s responses to emotional stimuli (red arrows), mediated by the amygdala, are suspected of being dysregulated in OCD. Antidepressant and antipsychotic medications target activity of regulating neurotransmitters from lower brain structures (raphe, LC, VTA).